A Story With Twists That Will Leave You In Shock 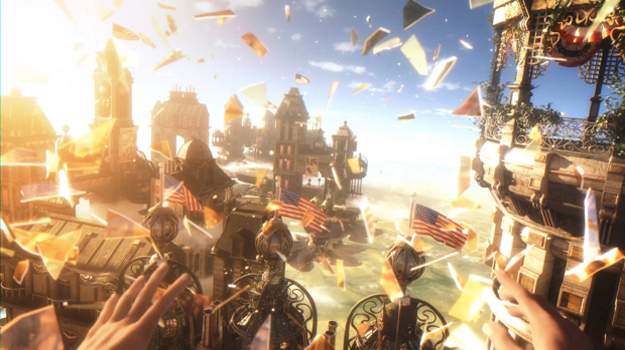 Bioshock Infinite takes place in the flying city of Columbia, in the first decade of the 20th century. You play the role of Booker DeWitt, a former Pinkertons detective who has been sent to Columbia to pay off his gambling debts by retrieving a certain girl.

If this were any other computer game, that linear narrative might suffice for many hours of gameplay. But this isn’t a ordinary video game, this is BioShock: the successor to what many critics believe is the greatest video game ever made. As such, the story very quickly takes a turn into macabre brilliance and doesn’t let up until many hours later.

The world in which BioShock Infinite unfolds is one of the most original and inventive to ever take place in any story, bet it a video game, book or film. The density of artistry that has been lavished upon every single element of the city and its inhabitants is breathtaking.

Booker is soon able to locate Elizabeth, the girl he has been sent to find, but she is a less than willing to leave Columbia, especially on his terms. What follows is an investigation of many elements that include quantum physics, multiple dimensional theory, an examination of political inequities and revolutions, and a deep view into the dark, dark places of human psychology.

In a lesser game, the disparate elements that are united in BioShock infinite would feel amateurish or simply tacked on to a fairly straightforward first person shooter game. But in BioShock they add to one another in a breathtaking scale and complete what can only be called a masterpiece.

As the player struggles to fight his way through the city, time and space, they will discover dark secrets about the world of Columbia, about the past, and ultimately about themselves.

Gameplay That is Not Overbearing 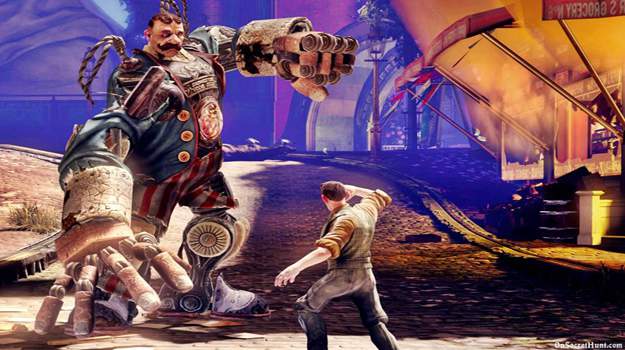 For all its narrative complexity and artistic achievement Bioshock Infinite is still a very straightforward game to play. It has surprisingly few branching narratives and the player is more or less directed through the story in a linear fashion. That’s not to say that the story is unsatisfying and was the open world to be a great factor in the gameplay, the plan might feel as though they missed some of the best parts of this absolutely breathtaking story.

You explore the world completing numerous small tasks, all of which tie into rescuing Elizabeth and getting out of Columbia. For these missions, you use a variety of weapons including a pistol, rifle, shotgun, machine gun and other grenade launcher type weapons. These may be upgraded and enhanced at machines around the city with money the player picks up on their travels.

For a steampunk style game, the weapons walk a fine line between usable effectiveness on one hand and historical accuracy on the other. The game designers have created a suite of weapons that is actually incredibly satisfying to use,

As in the previous Bioshock game there’s also a second set of abilities in BioShock infinite called Vigors. These give the player the ability to perform paranormal acts such as summon crows to attack your enemy or shoot fire from your fingers. By using different weapons and different Vigors in combination, the player is able to deal with enemies in an almost infinite variety of ways.

The enemies of BioShock Infinite are themselves varied and almost always satisfying. Stock enemies such as police and security guards soon trade into a variety of ‘heavy’ enemies such as the ‘handyman’ and ‘firemen’ who are protected and are much harder to kill.

There is also a compelling and innovative transportation system around the city that doubles as a variation on combat. The “skylines” allow the player to propel themselves at great speeds around the areas of battle, jumping on and jumping off an innovative monorail system from which they can jump down and kill opponents.

It’s a testament to the engine that drives the game that such rapid motion and pinpoint accuracy are usable in real time. Combining all these elements: weapons, Vigors, the skyhook system, the player has a surprisingly different array of options in dealing with the challenges that BioShock Infinite presents. 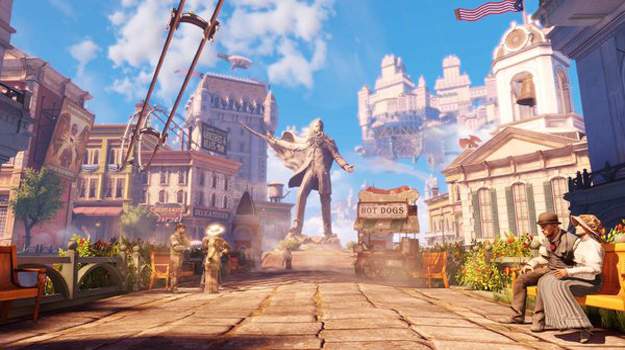 The design of the flying city of Columbia is what first gets the player’s attention. Much like the underwater city of Rapture in the first BioShock, Columbia is both breathtakingly beautiful and constantly menacing. All in all, through the work of the game designer’s, and incredibly fulfilling and captivating place to spend time.

The time and effort spent to make Columbia feel like a real world is immediately apparent. Every chair, every coin, every tiny detail is been lovingly crafted by the artists to give the place a sense of authenticity and immersion.

Even more than the original BioShock game, BioShock Infinite is a complete world and one that rewards almost endless exploration. Behind every desk and in every small corner there are numerous details which give the world not just the feeling of authenticity but a sense of realism.

Once Booker finds Elizabeth, she becomes a more or less constant companion and accompanies him through his subsequent adventures in the city. This is not mere companion mission, however. Elizabeth is a powerful ally but more than that, she and Booker’s constant dialogue throughout the game gives the player unique insight into the goings-on of Columbia and the story as it unfolds.

Both Booker and Elizabeth are well written and incredibly well acted characters, which is not surprising given that prominence in the story. What really separates BioShock infinite from other video games is it’s large and well rendered cast of villains and supporting characters. None were drawn from the tired, stayed, video game tropes of typical villains. Each has their own inner life, backstory and burning desires. Booker and Elizabeth must struggle with each one in tern in order to set right the events of Columbia and free themselves from their own past.

It is ultimately the characters, their interactions, and the struggle which give the game such an affecting presence.

And the Verdict Is…

BioShock infinite was released almost universal acclaim. It won numerous ‘game of the year’ awards and took many other video game prizes. Interestingly, one common objection reviews had despite the game’s brilliance was BioShock infinite’s overt, almost gleefully violence.

Other negative sentiments were due mainly to unfavorable comparisons with the original BioShock and how the sequel or spiritual successor lacked the originality of the former.

BioShock infinite will no doubt be played for many years to come and has set the standard, not just for first person shooters, but the all video games and media to come.