GET ALL THE LATEST NEWS ABOUT THE FAR CRY SERIES RIGHT HERE ON FREEPLAY.NET! 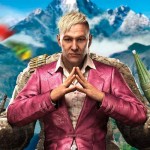 Ubisoft has announced the creation of Far Cry 4, the newest game from the Far Cry series that is slated for release on November 18, 2014 in North America and Europe, with Australia receiving the title on November 20, 2014. The game will be release on Xbox 360 and Xbox One consoles, PS3 and PS4 consoles, as well as a version for PC. The ga... END_OF_DOCUMENT_TOKEN_TO_BE_REPLACED