So Much Candy is a five reeled video best slots game that is all about sweets and candy, which explains the reason behind the naming of the game. This game is one of the latest games that made debut at Microgaming casinos. So before placing real money bets at the slot machine, you can try out the game here for free by placing demo credits on the slot machine so you can test the waters.

If you do that, you will not regret it as the game has a very captivating interface and top notch visuals, which is not really a surprise since the game is powered by none other than Microgaming, which is one of the leading names in the industry. So whenever you decide to enjoy this tasty experience and spin the reels, you will be mesmerized by the great visual of the slot. 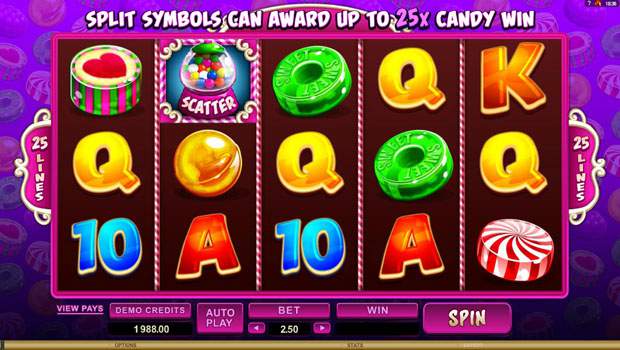 The gaming procedure begins with placing the bets under the game’s spinning reels. Unfortunately, players can’t pick how many of the 25 lines do they want to place, as they are activated automatically, what players can pick is the value of the used coins as well as number of coins per line. They can do that by clicking on the Bet Cell to see the betting options that the game holds. They can place up to 20 coins per line, and a coin value that varies between 0.01 and 0.20. Players can also keep track of the credits that they have next to the Bet cell, in the Credits Cell. Players will then click on Spin to initiate the game so the reels can start spinning to form combos.

Besides the placing a bet and clicking on spin, there is the Auto Play feature that can be quite handy. Through this feature, players will select a bet and a number of spins so the reels can spin automatically for that number with the set bet. Players can toggle between other different options to determine when should the auto play feature stop. Also, at any given time, players can click on the Stop button to stop the auto play function, even after one spin. 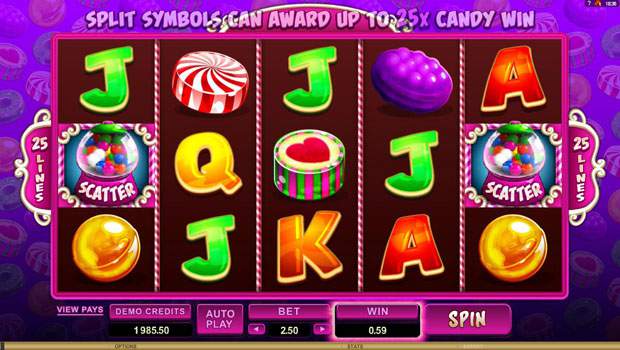 The visuals of the slot machine are all inspired by the sweet theme that the game is trying to convey. This is why as soon as players open the game, they will quickly notice the colorful interface of the game that captures the theme.

First of all, the color pink dominates the interface of the game, players would also see that the symbols that would land on the reels and lines of the game come in the form of tasty candy pieces. There is also the big candy machine that has a lot of candy balls inside of it. Other than the candy themed symbols, players will also find poker card symbols that represent the lower paying icons. 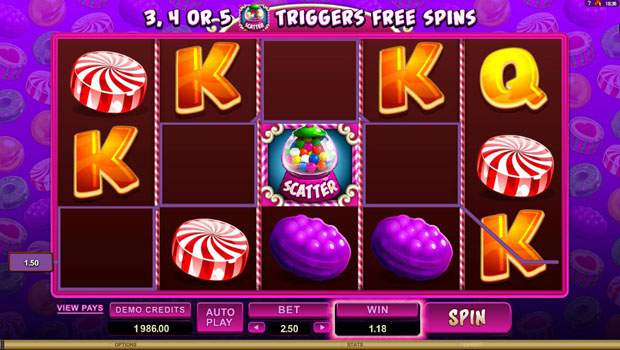 Players can earn a line payout whenever they manage to get at least 3 matching symbols on the same pay line from left to right. The different icons that will appear on the game’s reels give different payouts, players will be able to view all of these different pays by opening the payouts page of the game, they can do that by clicking on the Paytable button.

Apart from the regular payouts, there is a special feature that is called the So Much Candy feature. This feature is triggered when players get at least 3 high paying candy icons on the same payline. When this happens, each high paying candy symbol will split to up to 5 candy icons per icon. This means that whenever this feature is activated, players can earn the payout of up to 25 symbols. The highest payout that can be earned through this feature is equal 32,000 coins.