The Terminator Saga movie series is one of the movies that launched Arnold Schwarzenegger into stardom. The movie was themed around the young John Connor and his mom, Sarah Connor. He is destined to lead the resistance against the rise of the machines in the future. A T-800 and a T-1000 terminators were sent from the future in order to kill him when he is still young to prevent him from leading that resistance. The resistance themselves sent the Terminator, that was played by Arnold Schwarzenegger to defend John Connor and make sure he stays alive to lead it. So if you are a fan of this movie and always wanted to travel into the world of the Terminator movie and join Connor, his mom and the lethal terminators, then this Terminator 2 online slots game is the game you should be playing. 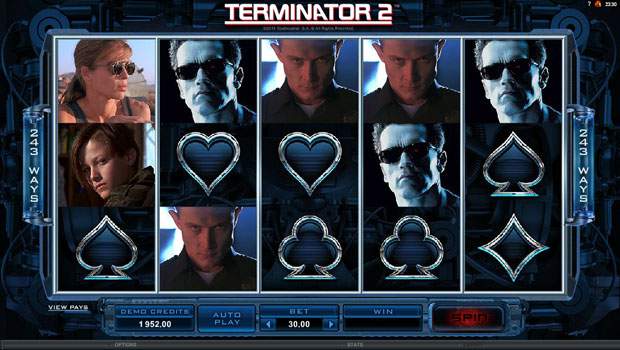 This game manages to create an immersive and an engaging gaming experience that will always have players at the edge of their seat. It creates this amazing experience through the visuals of the game, including the symbols and the interface of the game. This is why players will see that the reels of the game have a futuristic look to it, which fits the theme of the game. So if you want to enter the Terminator movie world, all you have to do is place bets and spin the reels so you can start enjoying the great experience and the adventure that this slot machine has to offer. You can do that right here for free with no deposits so you can try out the game, enjoy its features before placing real wagers on the game at online casinos.

Players will place their bets under the reels as they choose how many coins they want to place in bets as well as the value of the coins. They will find these options at the Bet cell. They will then click on Spin to start the game so the reels can start spinning so they can start earning the prizes that the game offers. 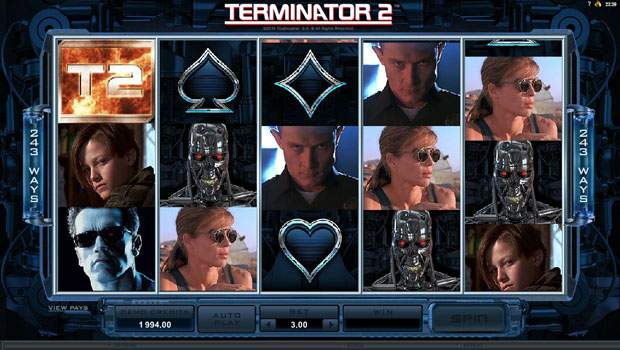 The game’s visuals are all affected and inspired by the movie that the game is themed around. This is why players will notice the futuristic interface of the game. The same goes for all of the symbols that will appear spinning on the reels and the lines of the game. For example, the symbols include the T-1000, the T-800, the terminator, Sarah Connor, John Connor, a scatter electricity ball, and card suits that come with futuristic designs to be fitting to the theme of the slot. Of course, all of the visuals and the audio effects are top notch, since the game is from the gaming portfolio of none other than one of the biggest names in the industry, Microgaming.

These visuals manage to create an immersive and a highly engaging gaming experience that players will surely enjoy, especially if they are fans of the movie. 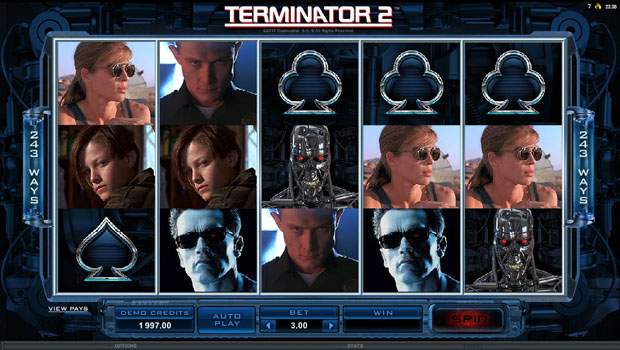 The game has the 243 ways to win format, which is a highly rewarding setup that is better than the usual paylined format that most games have. Players will earn payouts by forming winning combos of matching symbols on any of these ways to win. The amount of the reward depends on how many matched symbols and the symbol itself.

The different payouts that the different symbols can give are listed at the payouts page of the game that can be opened by clicking on the View Pays button. The highest payout that the game can give is equal 1500 coins. It is given to players when they get 5x T2 symbols on the same way to win.

The game’s special symbols start with the wild icon, which is none other than the T2 fiery symbol. This symbol can substitute for any of the other icons on the reels of the game, except other special symbols that have special features which are the scatter electricity ball and the free spins T-800 icon.

The scatter electricity ball symbol can give out greatly rewarding scatter rewards. Players will earn 30, 60, 300 and 3000 when players get 2, 3, 4 and 5 scatter icons on the reels of the game in any location. Also, 3 of these symbols can activate the free spins round that can give players up to 10 free spins with 1024 ways to win. During the free spins, the T-800 symbol can transform into any other character to help players get paid.

The last bonus feature is called the T-800 Vision, it is a bonus round that is activated randomly during the game play. When that happens, the players will see the reels from the reddish point of view of the T-800. This bonus round is quite rewarding because all character symbols give great prizes. Also, during that round, only one scatter icon is needed to trigger the free spins round.